They say the Mind of a True Warrior is different from that of other humans. In fact, some go to the extent of stating that it even differs from the mind of any usual soldier or fighter.
Traditionally a true warrior is free from all worldly attachments. All his possessions are known to be temporary. The beleif is that attachment leads to weakness within the warrior.

After having successfully compelted the Ten Chi Jin Seminar conducted by Arnaud Cousergue - 15th Dan Shihan. (See Photo of my Certificate here) I can confidently say that the True warrior actually exists within each and every one of us.

Let me explain. The Beauty of the martial Arts that we practice - Ninjutsu - is the emphasis of "returning to zero" and not being bound by conventional, rigid judgments, and preconceived notions. Which is why I think we study movement which is waza based (technique based) as opposed movement in Karate and other forms which is kata based (form based)

Shihan Arnaud and my Shidoshi Shiva teach Ninjutsu as it was transmitted in Japan when they first received it. This includes bowing, using titles and all the formal rituals common to that time and which link us to past traditions of the Art. All the techniques we learnt were from the The Tenchijin Ryaku No Maki (Heaven, Earth and Man Strategy Book). TenChiJin is the basics. It teaches us to empty our minds so that it can fill up with substance. To Fill an empty container is easier - Bigger the Kokuu (Empty Space) the more there is to fill. 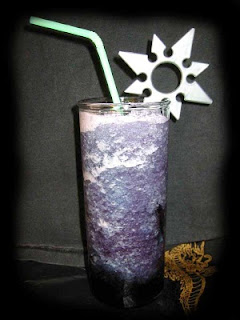 If we accept the premise that the purpose of a Martial Art is dealing with confrontation (on all levels from mental to physical) then an appropriate method of study is how others have done it successfully in the past. Theoretically, if I do (act, think, and believe) exactly like someone else, over time, I should get similar results. This is what I would call mentoring or role modeling or being a Guru!. This is the dominant way culture is passed and the basis of much of our learning patterns. If I act, think, and believe like my successful Art tells me, I should be able to duplicate its success for me... shouldnt I?
So to Sum up this Seminar's Learning!
TEN - Deals with learning the footwork and Distance
CHI - Deals with the bio mechanical aspects of the Waza
JIN - Combines the Ten and the Chi levels to acheive Natural Movement 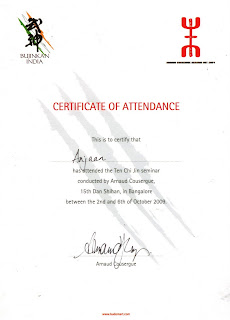 This martial art - Bujinkan Budō Taijutsu- allows us as students to adapt the sequences of a confrontation (with various scenarios) to what speaks to them personally almost immediately.
So where does the question of the True Warrior Come in? After this Seminar, I have come to the conclusion that the true warrior lies within, and he can be your best friend or worst enemy! I am thankful to Shihan Arnaud for being such a fantastic mentor and for having opened out yet another beautiful facet of this form in our lives. It'll be a memory I cherish for a long time.
BUJINKAN INDIA Goal - Looking for the merging of body, mind & spirit to let go of all appearance and develop the being in permanent adequacy with our human and physical environment
"If you understand, things are just as they are.
If you do not understand, things are just as they are"
Zen Maxim
Posted by Unknown 1 comment: