December is always a special month in the Bujinkan. The Grand-master of the Bujinkan - Dr. Masaaki Hatsumi celebrates his birthday on the 2nd of December :)


Our Soke (grand-master), besides being  a highly accomplished martial artist, doctor and healer, writer, actor, and artist is the founder of Bujinkan System which encompasses nine ancient martial art traditions of feudal Japan. This system integrates physical,mental and spiritual elements for personal growth and development. He is the heir and inheritor of these nine traditional schools of Ninjutsu and Samurai-jutsu and he can also be described as the "last living ninja".

Every year in December his students from all around the world traveled to Tokyo for the Dai Komyo Sai (DKMS) training sessions and celebration of his birthday. I had the luck to be part of DKMS 2010 and it was an exhilarating experience. This is the first year (2013) that there will be no DKMS. 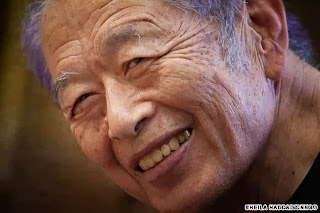 As our Soke (grand-master) turns 81, we at the Bujinkan UAE, decided to honor him with one more opportunity for you to train in his art. I think he would like this birthday gift! :)

Great news for you if you Live in Dubai. We start our Morning classes in December. These will be Every Tuesday starting December 3rd. The classes will be of 90mins from 7:00am to 8:30am (you can leave earlier if you have to go to work) and will comprise of basics, advanced movements and weapons.

These classes will be held at Core Direction in Dubai Marina - Ground Floor Dreams Tower 2 (same Building as Bob's Fish and chips). Here is the location map.

Stay tuned to our Facebook page for more updates and call us and have a chat if you want to know more. Trust me we are super friendly! :)

We hope to see you on the mat.
Posted by Unknown No comments:

I love the Bujinkan system of fighting. Here is reason #1493

Part of our training includes Junan taiso (junan meaning flexible). This is a yogic method of stretching and breathing. This predominently helps us develop and maintain good physical condition and wellbeing. The exercises promote relaxation, blood circulation, muscle toning and flexibility
All major joints are rotated and stretched in a proper manner while healthy breathing and concentration are practiced.

The use of breathwork through out any given exercise drill set is quite literally mind blowing. The exercises are designed to strengthen the body from the core outwards, allowing for greater muscle and joint flexibility. Furthermore due to great emphasis being placed on ligament as opposed to muscle strength, the practitioner finds they are able to practice effectively right into old age. The body becomes full of calm yet explosive with energy.

Training in the UAE just got a bit more cooler. We have had regular classes 3 days a week over the last 4 months and now even have an active community on facebook.

In case you are not a part of it.. then join right now. All you need to do is click "like" on www.facebook.com/bujinkan.ae

This page is predominently for practitioners of Bujinakan Budo taijutsu (Ninjutsu) in the United Arab Emirates (Dubai, Abu Dhabi, Sharjah, Ajman) But even if you dont practice you are more than welcome to come hang out with us! :) If you want to know more about martial arts in general or our martial arts system in specific, feel free to give us a shout.

The Sensei who failed in his journey.

The idea was to travel across many cities, meet many people, bless, guide & help followers & seekers. The trip was planned to take a year to complete.

The route was charted out, the milestones chosen, the paths marked. The logistics agreed upon and the grand plan decided, signed and sealed.

On the day of the journey, Sensei took a seat at the back of the car. Eager Monk was driving and Ego Monk was navigating the car.

The car engine growled, & its tires crunched the porch gravel. Just as the car reached the Monastery gate, Ego Monk said, “Take a left. That's the shortest route to reach the highway.”

Eager Monk said, “No. We have to turn right. That’s the shortest path.”

Irrespective of which side the car turned, just by traveling a few hundred meters, the car would have reached the highway.

The car, the monks and the day remained still. Argument and dissidence rained everywhere. It was like black rain.

When the two fighting monks finally looked back to request Sensei for a verdict, they were shocked to realize that he was no longer in the car. He had vanished into thin air...

Truthfully speaking, Sensei had not vanished. He had calmly walked out of the car and headed back to the Monastery. The two argumentative monks had not noticed him leaving.

In the meditation room, Sensei had performed ‘see-saw breath' meditation with the Monks and & told them, “I failed today. My journey of a thousand miles could not even begin with a single mile.

I shared this story to inspire starting over. Learning. Change & dedication to a purpose!
May you become aware of your ego, All the best!
Posted by Unknown No comments: